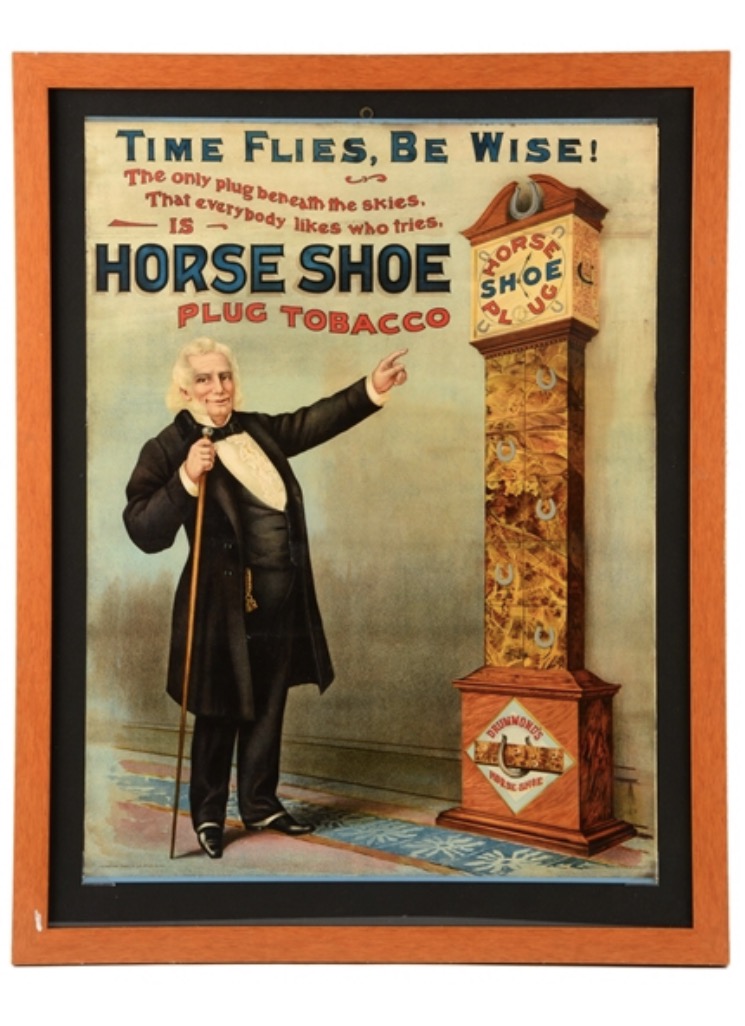 The Horse Shoe Cut Plug Tobacco was certainly creative with their advertising images over 100 years ago.  I have seen several ads from the Drummond Tobacco Company in St. Louis, MO where the cut plug pieces formed an item in the advertisement.  This great lithograph uses a play on words about how valuable time is by incorporating the cut plug sticks into the body of the grandfather style clock.  The ad also states “Time Flies, Be Wise”.   Upon closer examination you will find the images of horse shoes drawn into the piece of cut plug tobacco!   At the bottom of the clock is a nice image which incorporates the Drummond Tobacco Company name into the image.

I have seen other ads from the Drummond Company which used the Cut Plugs images to be used as part of a ship’s body, a telephone post, and a building exterior walls!   The company was pretty creative by incorporating the rectangular shape of their cut plug product into the scene the advertising was portraying. I have not seen a lot of other companies incorporating this style of advertising from the late 1800’s or early 1900’s, but the Drummond Tobacco Company was certainly ahead of their time in this regard.

The Drummond Tobacco Company was founded in 1873 in Saint Louis, Missouri and was very successful.   The companies’ first cigarette product was the Chesterfield brand which continued to be sold well into the 1960’s.   However, the companies’ largest selling brand was the Horse Shoe Cut Plug tobacco product, which propelled the company to be bought by the larger Durham, N.C. based American Tobacco Company in 1898.   The Horse Shoe brand sold well into the 1930’s under the American name, however, as smoking trends changed, cut plug went out of favor while cigarettes became more popular.   It was simply easier to light a cigarette than roll up cut plug in your mouth and chew on it, or break it apart for a pipe as had been done many years before. Fortunately the Drummond Companies prolific use of advertising left collectors with many early advertising keepsakes to be enjoyed still today!