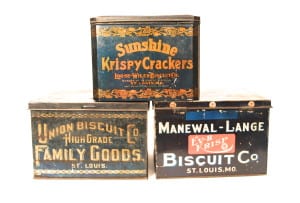 Antique advertising bakery collectibles from the late 1800’s and early 1900’s consist primarily of tin or wood boxes for breads, biscuits, crackers, cookies and other products. Flour Mills were vital to the bakeries and also advertised on signs, trading cards and the side of buildings.

For years, hometown bakers and general stores offered soda crackers in large barrels or wood crates for consumers to dig out their favorite crackers and put in their own paper bag. Soda crackers were a main part of the everyday diet made from flour, yeast and shortening. However, it was considered better when someone got “the top of the barrel” crackers because by the time consumers reached the bottom, crackers were often dirty, soggy and stale due to humid air and from not being sealed.

Eventually bakers developed biscuit tins and cardboard boxes to improve product freshness and keep the food sanitary. The companies used sealed paper linings inside the packages to keep crackers and baked goods fresher longer. Advertisers promoted their company logo and images on the tin containers and boxes to draw attention. People would keep the boxes after the crackers were used up for other storage uses. Many of the vintage biscuit boxes are common bakery collectibles still found today in many shapes and sizes. 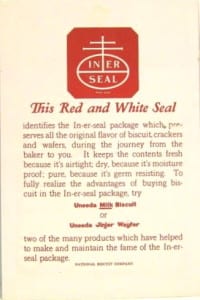 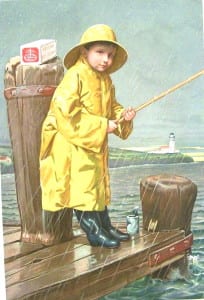 National Biscuit Co. (now Nabisco) was one of the first companies to mass-produce and package their baked products as more sanitary and fresher than the cracker barrel. In the 1920’s, the company introduced a packaged biscuit called Uneeda and put them in tin boxes and small cardboard boxes with the “in-er-seal” waxed paper lining. National Biscuit used the slogan “Lest you forget, we say it yet, Uneeda Biscuit.”

The boxes featured a biscuit boy who wore a yellow raincoat and represented dry crackers even in the rain. The Uneeda boy became a popular face of the product and was one of the most recognizable ad images in the early 1900’s. Its interesting name Uneeda was a popular draw with consumers.

Other companies imitated the Uneeda brand with names such as “Ulika”,  ”Uwanta” and “Iwanta” Biscuit brands.  However, National Biscuit Co. sued the others and they put a stop to more than 200 cases of copyright infringement with these competitive bakeries. Many of the Uneeda advertising pieces are considered valuable antique bakery collectibles.