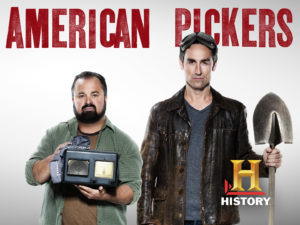 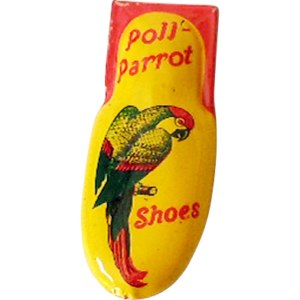 Since Mike and Frank didn’t have much historical background about the Poll Parrot Shoes brand, the show’s staffers sought out Randy to learn more about the brand because he had similar items on his website. These Poll Parrot vintage promotional clickers used to be giveaways for kids with their shoes. The fun tin noise makers featured the company’s mascot, a bright red and green parrot on a yellow background. 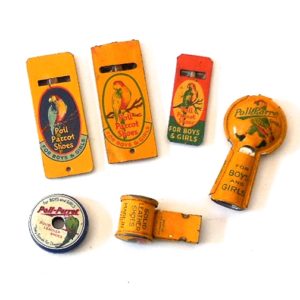 Poll Parrot Shoes had other toy giveaways such as whistles, rings, buttons, bookmarks and children’s tin savings banks featuring the parrot illustration. The company used several parrot models in their advertising from the 1920’s to 1960’s and created the slogan “They speak for themselves”. 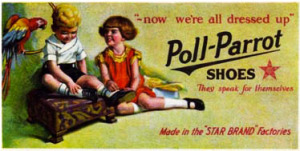 Poll Parrot Shoes Slogan “They Speak for Themselves”

Randy provided the American Pickers with additional vintage advertising related items that were featured throughout the episode, and he was recognized in the show credits.

Learn more about the Poll Parrot brand and how the parrot icon was the brainchild of Paul Parrot, the original owner of the Paul Parrot Shoes based in St. Louis, Missouri, featured in a previous Antique Advertising Expert blog, Vintage Shoe Companies and their Colorful Mascots.

The Antique Advertising Expert is pleased to help with appraisals and historical background information for any individual or organization who is interested in learning more about the history of the antique advertising treasures they are uncovering.