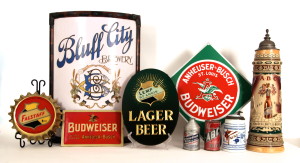 Breweriana includes any type of beer collectible related to breweries and beer. Beer collectibles have always been very popular and with a recent boom in microbreweries a new generation of people are finding out about different types of beer memorabilia. Accordingly, some of the original beer brands are being reintroduced which is creating an interest in the history of beer, the breweries that once made them and their original advertising.

Some of the most popular types of collectibles are beer trays, corner signs, reverse-on-glass signs and tin over cardboard signs. Other Breweriana collectibles include etched glasses, tap knobs, lithograph posters, clocks, beer cans and bottles. Collectors sometimes focus on a geographical area, a particular brand, or a style of an advertising piece. Some popular brands include Anheuser-Busch, Falstaff, Hamms, Pabst, Schlitz, Jacob Ruppert, Krueger, Maier, Frank Fehr, August Shell, Wm. J. Lemp, and smaller regional companies such as American Brewing Co., Griesedieck Bros., Hyde Park and Columbia Brewing Co. Breweriana items that typically command the highest value were produced prior to Prohibition that started in 1919, and these items can be worth several thousand dollars or more when in good condition. 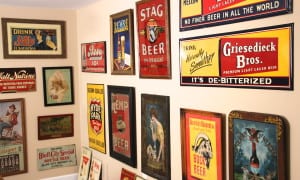 Some of the most desirable types of Breweriana advertising were corner signs, reverse-on-glass signs and lithographs with early brewery factory scenes on lithographs. Corner signs were commonly made from tin, porcelain, brass and a glass called Vitrolite. The corner signs were placed outside the local saloons and were plentiful in the early 1900’s as revealed in old photographs. It is rare to find these signs today which make them very valuable. An example of a corner sign is from The Bluff City Brewing Co. in Alton, Illinois depicting the company’s logo. These corner signs are typically worth several thousand dollars in good condition. 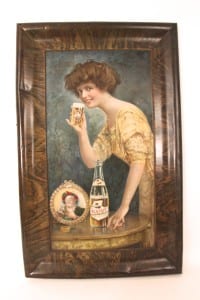 Reverse on Glass (ROG) signs are signs that incorporate a process of putting advertising on the backside of glass. They are considered rare and valuable due to the breakage of glass over the years. The paint could peel off of the backside of the glass due to moisture, heat, and many other factors.   Many pre-Prohibition signs were ROG’s but the process was still popular in the 1930’s-1950s. Tin over cardboard (TOC) signs have always been one of the most collected type of signs in the Breweriana world. TOC signs were used both before Prohibition and heavily again afterwards until the 1960s. A celluloid cover was sometimes placed over the tin advertising as a way to protect the design on the sign. TOC signs were eventually replaced with signs made strictly from cardboard because they were cheaper to make, easy to put up, and could be thrown out when the sign was worn due to weather or the advertising changed.

Beer trays originated in the late 1890’s and are very popular collectibles today. Most beer trays were lithograph designs on tin depicting the company’s logo or other image. Some trays were also made out of brass or porcelain. Most trays were circular, rectangular or oval and were used by servers to carry beer to patrons. Popular brands of these trays to collect are Budweiser, Miller, Pabst, and ABC Brewing. Tip trays also generate interest. They were smaller trays about 3 to 4 inches in diameter and designed for people to put tips in but also used as coasters and ashtrays. Chargers were oversized trays and were intended to hang on the wall of saloons for advertising. 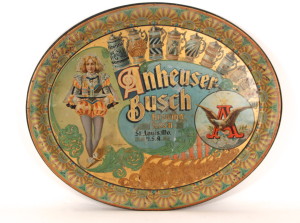 One reason Breweriana is so popular is that beer is a favorite beverage of many and has been around so long. Although it’s not known when beer originated, it most likely came along when the cereal agriculture was developed about 12,000 years ago. In the United States, the popularity of ales and lagers was at its peak just before Prohibition when over 1300 breweries were established.  The beer industry dramatically changed during the national Prohibition from 1920 through 1933. Beer was labeled as intoxicating liquor by the government making it illegal to make, transport or sell beer. Breweries were only allowed to make “near beer” or beer with less than half of 1% alcohol content. A few of the most widely known near beer brands were Bevo produced by Anheuser-Busch, Pablo by Pabst, Vivo by Miller and Famo by Schlitz. 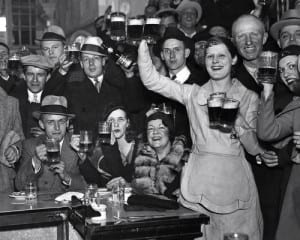 Some breweries remained in business during Prohibition by producing other products such as colas or mineral water. Pabst, Miller and Schlitz focused on using their malted grains as an extract for malted flavored dairy drinks or baked goods such as bread, tea biscuits and sweets. However, many consumers bought the malted grains to illegally make their own “home brew” as a way to get around the alcohol ban. Anheuser-Busch began making ice cream because they already owned refrigerated trucks and therefore reused them for transporting the ice cream. Adolph Coors’ Glass Works originally produced bottles for Coors beer and also had a pottery and ceramics division, so ultimately they expanded their non-beer division during Prohibition. The national Prohibition ended on December 5, 1933 and enabled the breweries to focus on beer production again.