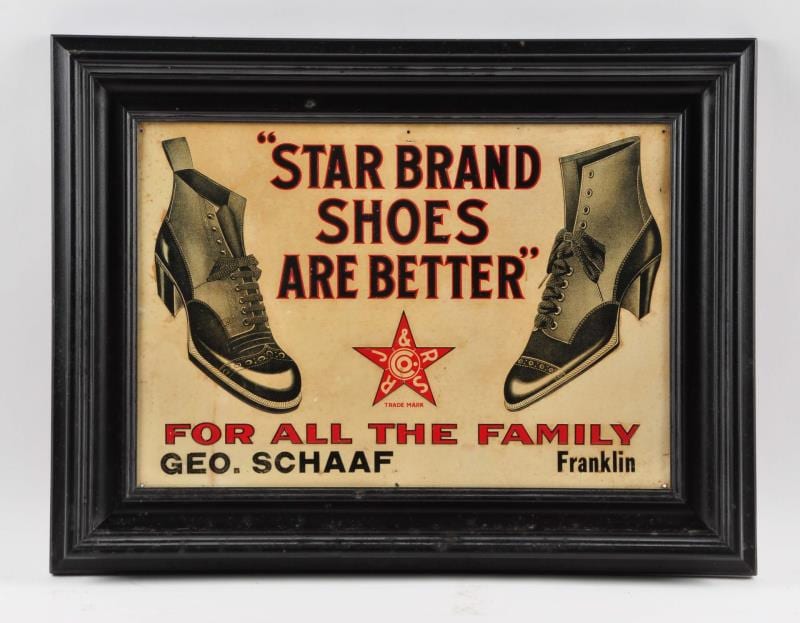 Featured is a really neat tin sign from the Roberts, Johnson and Rand Shoe Company, which was based in Saint Louis, Missouri.  This sign was a stock sign, and the manufacturer simply added hundreds of general stores names and cities attached to the sign where their brand was being sold.   The sign says “For All of The Family” which was a logo they used quite often in their advertising.  Placing a local store on a stock sign was a common practice for many manufactured products in the early 1900’s, not just for shoe manufacturing.

This particular sign advertises the Geo. or George Schaaf Store, which was in Franklin, Illinois, just outside of Springfield, IL.

Featured is an early 1900 era coffee bin from the Paxton and Gallagher Company based in Omaha, NE.  This tin is large and would allow a patron to scoop out coffee by the pound at the store.

Featured is a beautiful General Store coffee bin from Dwinell-Wright Coffee Company which was based in Boston, MA with a Western branch in Chicago, IL also. This bin advertises both the Java and Mocha brands of coffees.