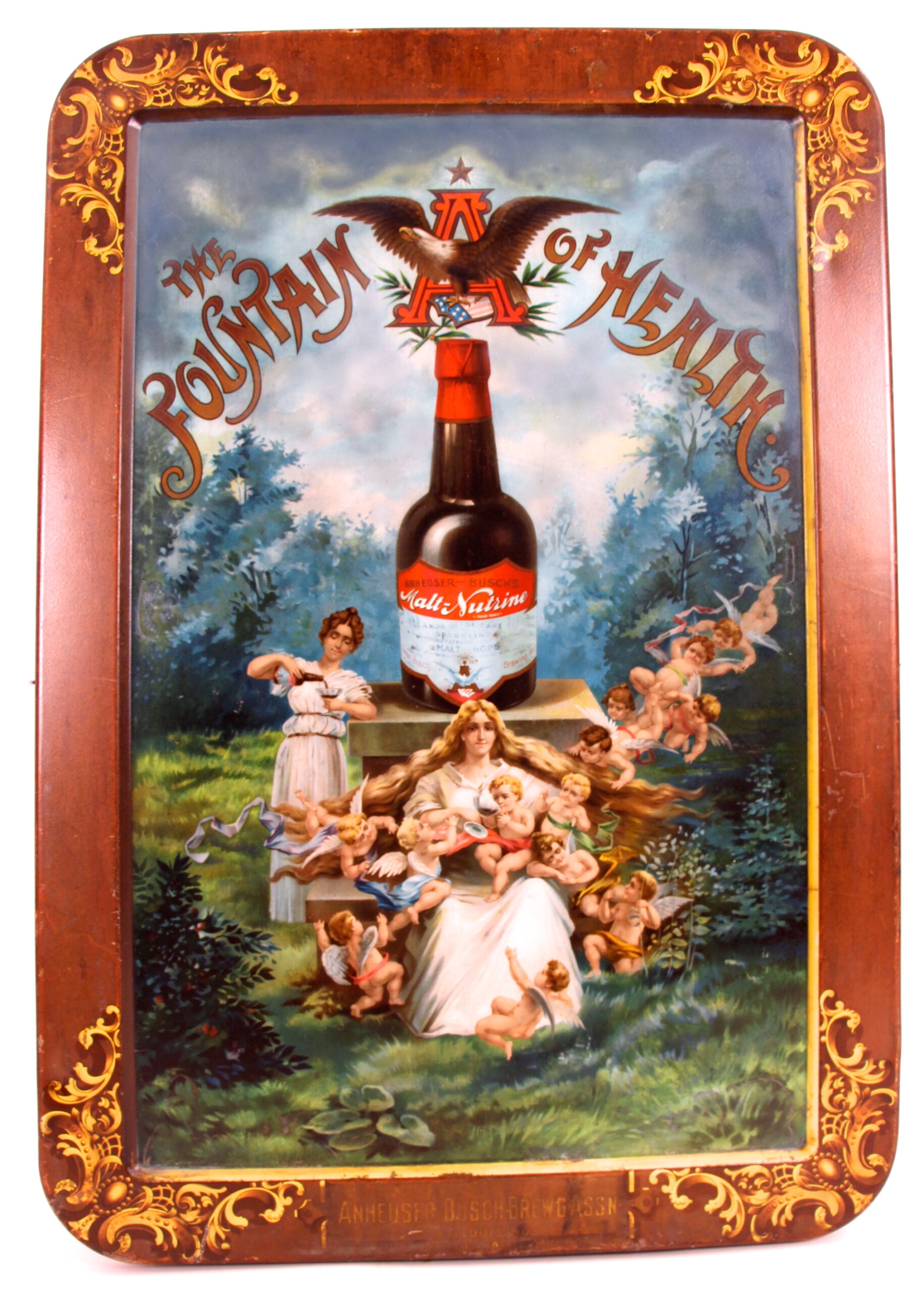 This is an Anheuser-Busch Malt-Nutrine Tin Sign, Circa 1905. It’s a self-framed tin sign with an image of women and “winged cherub” babies. This advertising sign “The Fountain of Health” was likely displayed in a doctor’s office and is considered fairly rare. The Malt-Nutrine brand was produced from 1895 to 1942 by Anheuser-Busch based in St. Louis, Mo.

Anheuser-Busch’s Malt-Nutrine was a low-alcohol form of beer, considered a “tonic”, “malt extract” or “liquid bread” with its main ingredients of barley, malt and hops. The drink was in a short amber bottle and had less than 1.9% alcohol. It was promoted as a health benefit for nursing mothers, and for people with insomnia or who were ill. It was distributed through drug stores and grocery stores, and served at health resorts.

This vintage Malt-Nutrine advertising sign was designed primarily to get the attention of new moms because of the women and “winged cherub” babies in the image. Other Malt-Nutrine ads were featured in women’s magazines and had images of nursing mothers and their babies.  A Good Housekeeping Magazine ad in 1919 said, “The Healthy, Happy Mother owes to Malt-Nutrine, liquid food and tonic, her excellent state of well-being. It gives her endurance and quick restoration and an ample supply of nourishment for the little one at her breast. It quiets her nerves, whets her appetite and brings to her sweet, restful sleep. Her strength and joyousness are imparted to her baby – a healthy, happy pair.”

According to Anheuser-Busch, “Malt-Nutrine was highly esteemed by the medical profession and its popularity resulted mainly from the fact that doctors prescribed it for patients in need of building up their health, such as new mothers, convalescents, the anemic and aged.”

Anheuser-Busch ran strong advertising campaigns for its time, mostly in magazines and signs in physicians’ offices. A magazine ad in 1895 stated, “Malt-Nutrine, the food drink, is crushed from the best malt and hops. A rousing tonic. To the nursing mother it is nourishment for herself and babe. To consumptives and sufferers from wasting diseases, to all who are thin and sickly, it means more flesh and greater strength.”

Malt-Nutrine’s formula was forced to change during the national Prohibition from 1920 to 1933. Anheuser-Busch reduced the alcohol content to less than half of one percent in Malt-Nutrine, and it affected the taste of the drink. This new taste of Malt-Nutrine was not popular and caused sales to decline. Ultimately, the beverage was discontinued in 1942. However, many of the advertising collectibles from this unique beverage still exist today.

Self-framed tin signs such as this one for Malt-Nutrine are highly sought after by collectors because of their bright colors and striking lithography. Tin signs went through a lithographic process, a printing method that started in the early 1800’s. The lithographic process was made easy with the invention of the lithographic offset press.  The process printed one color for each run through the press.  Accordingly, each color required a new printing plate for the individual color application. So the more colors on the tin, the longer and more complicated it was to produce the item.

In order to make a self-framed tin sign, the lithographed artwork process was applied to one piece of sheet metal. The main image was printed in the center and the simulated frame was printed on the same piece of metal. The entire metal was put into a machine in order to bend it to the sign’s finished shape.