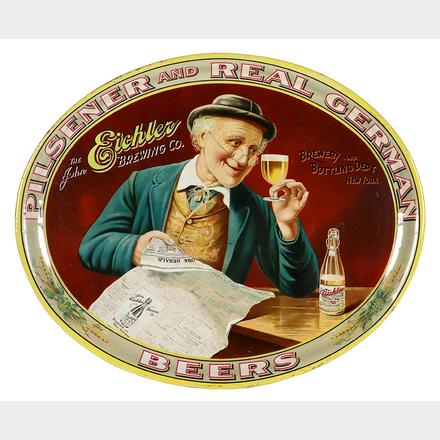 The John Eichler Brewing Company which was based in the Pre-Prohibition days in New York City was proud of their Pilsner German style beers. In fact, they were so proud that much of the Eichler Brewery advertising uses the reference to their German style beer products. This particular tray features an older gentleman almost toasting himself as he reads the paper with his glass of Eichler beer. The tray is interesting in that it also notes the fact the bottling department was associated with the brewery, something not often seen with brewery serving trays, or any of their advertising outside of printed ads for the most part. Why John Eichler chose to do that is unknown to me.