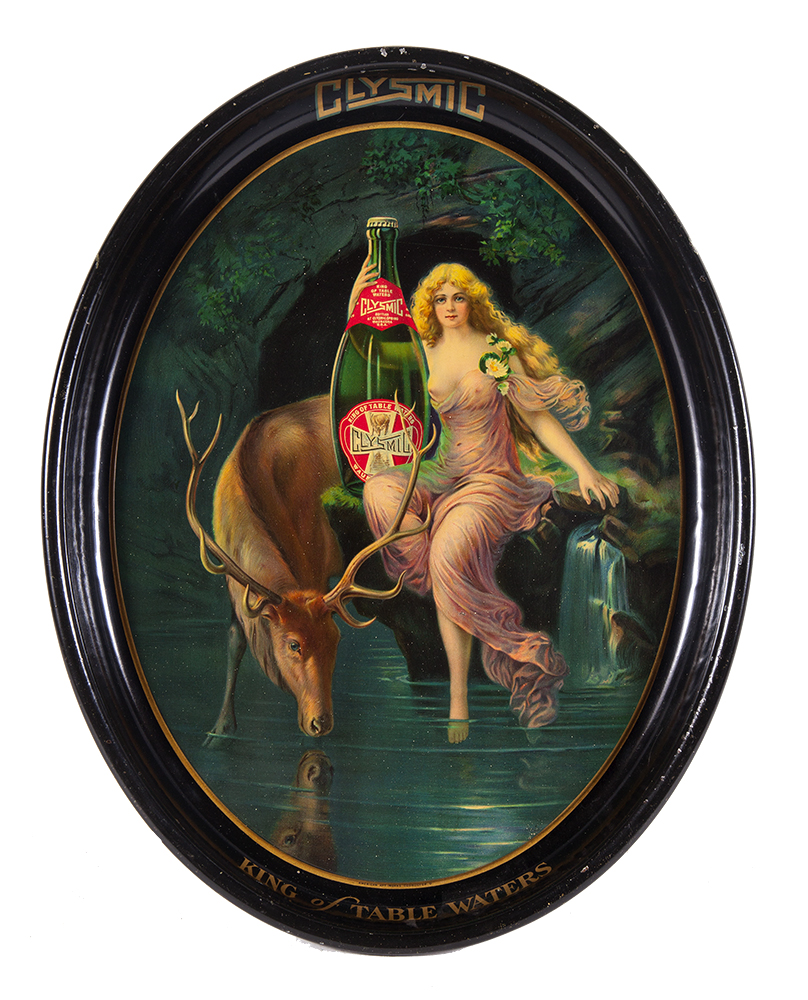 I have always loved the image on this tray which was produced by the Clysmic Springs Table Water Company, formerly based in Waukesha, WIsconsin.   I often refer to this tray as the beauty and the beast image, simply because it is rare to find an advertising image with a beautiful woman on it portrayed next to an animal.   Children or cherubs..yes.  But an animal by itself?   It is simply a rarity.   This particular tray portrays the nymph character next to a buck which is drinking the pure water.   One can only envision the same pure water is what the Clysmic brand used for their table waters.  This tray like so many other versions of serving trays from the company always feature the same image, although the colors and the styles of trays were varied over time when produced.

The Clysmic Springs Water and Mineral Company was based in Waukesha, Wisconsin around 1868 and remained in business until 1918.   Originally called the Waukesha-Lithia Springs Company, this company remained in business for many years although it later changed the companies name to the Clysmic Springs Table Water Company.   When founded, Waukesha quickly became the Mineral Springs Capital of the U.S., and thousands of people literally flocked to the city from all points in the U.S. to partake in the cities water. The visitors not only drank the water but bathed in the water hoping to gain strength from the water’s medicinal qualities.  Why the mineral spring fad ended is unknown to the author, but I suspect knowledge was gained which simply told the truth…the water was not as medicinal as many had originally thought.   During it’s heyday, Waukesha boasted about 60 different mineral springs locations.   Today none exist, but reminders remain with items such as this serving tray of what was once a busting business throughout many mineral springs hotbed locations in the U.S.