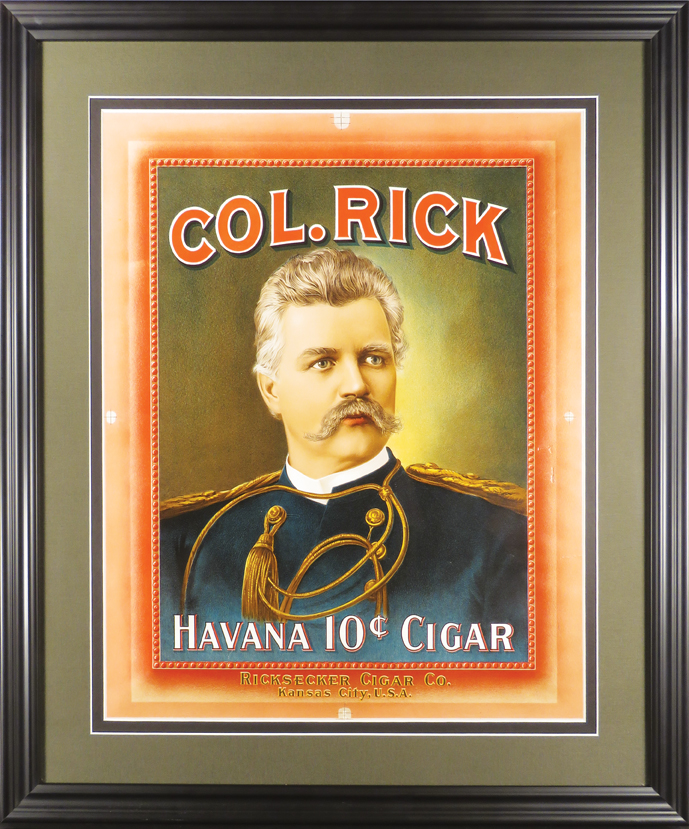 I was intrigued when I first saw this early cigar advertising poster from the Ricksecker Cigar Company in Kansas City, MO.  Who was Colonel Rick, and what does he have to do with cigars?  This image is very bright, and Col. Rick looks very distinguished.   The name Rick certainly resonates well with the name Ricksecker Cigar Company too.   After reviewing closer, and seeing Colonel Rick appeared to be wearing a Civil War uniform, I decided to delve deeper into a potential correlation.

The Ricksecker Cigar Company apparently had no relationship with their cigar namesake, other than they decided to capitalize on a Civil War hero, who apparently helped end the Civil War!   Private John Henry Ricksecker of the Union Army was honored for his valor at the Battle of Franklin, TN in 1864.   Mr. Ricksecker was honored for capturing the flag of a Confederate artillery unit during the Battle of Franklin. While it may not sound like much today he quoted, in 1864 it represented the defeat of the enemy.   And knowing this, the Recksecker Cigar Company decided to name a cigar brand after the Civil War hero, albeit changing not only his name  but his military rank to as he went from Private John to Colonel Rick!   I suppose a Colonel would draw more attention than a Private would?   I guess it’s all about marketing, and a little white won’t hurt sell a product when most of the customers don’t know the difference.