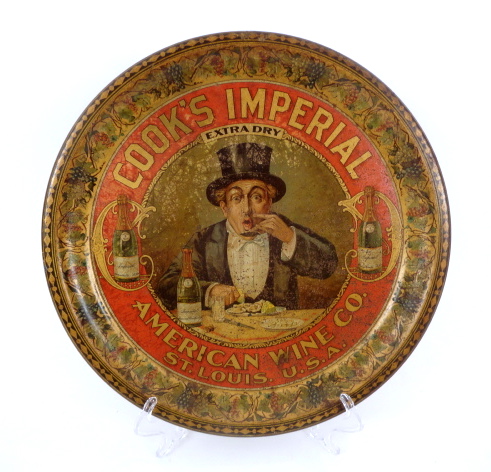 The Cooks brand featured the top hat man in their early advertising starting in 1902. Interestingly, the top hat man was also used by the Lemp Brewery in St. Louis as their advertising mascot.  However, the character was slightly different and looked more distinguished on the Lemp tray compared to the Cooks tray.  The top hat character on this Cooks tray is drinking champagne and eating oysters in the scene however is not very sophisticated looking. Both the Cooks and the Lemp top hat trays were produced by the Chas. Schonk Advertising Art company based in Chicago, IL.  The American Wine Company went out of business with the start of Prohibition in 1918.

Pictured is a metal charger sign from the Stone Hill Winery Co. in Hermann, Missouri. Circa 1900. This metal charger has two small holes on the rim area designed to allow it to hang on the walls of a local establishment which was selling their product.

This is a Pre-Prohibition Reverse-on-Glass (ROG) Sign manufactured by the Stark Missouri Wines Company in St. Louis, MO, circa 1910.