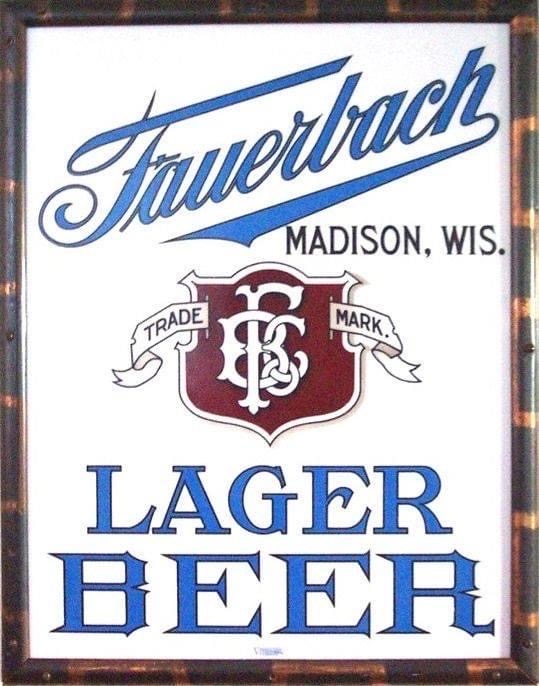 Featured is a great vitrolite glass advertising corner sign from the Fauerbach Brewery which was located for many years in Madison, Wisconsin. This particular vitrolite sign is encased in a brass or cooper like metal casing, with a lined design, a very commonly used design for these outdoor advertising signs from the pre-prohibition era. At the very bottom of the glass sign one can read the Vitrolite Company name in small print. Corner signs like this one have a wooden backing with a 90 degree angle, allowing the tavern or saloon to hang it on the edge of the building with the cut out wood backing placed firmly against the building.

The Fauerbach brewery started in 1848 and was in business until 1966, brewing beer the entire time with the exception of the era of prohibition from 1920-1933. The brewery owners survived during prohibition selling cereal beverages, cheese, and soda. This was a similar route taken by many brewers during this particular time period. The brewery eventually was closed in 1966 due to the inability to compete with the national breweries. in 1967 the brewery was demolished, but the name lives on with the reinvention of the site where the Fauberbach Condominiums were built on the brewery site in 1978.