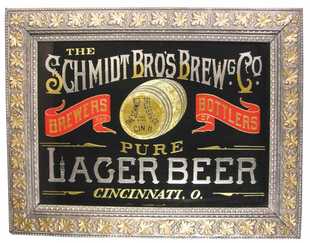 This impressive Reverse on Glass Painted sign is from The Schmidt Brothers Brewery which was also called the Crown Brewery, located at 138 W. McMicken Avenue in Cincinnati, Ohio. This lager beer sign indicates the company was both selling bottled beer along with their usual draft beer. ROG signs like this in their original frame are very difficult to find in today’s marketplace, simply due to temperature changes and humidity eventually causing the paint to often become detached from the glass over the years.

Friedrich and Heinrich Schmidt started this brewery in 1870 in the River Rhone area of Cincinnati. The Brewery building is still standing today. Before Prohibition one of their main selling brands was Happy Days Beer. However, true happy days were not to last long as prohibition ended their legitimate beer making adventure in 1920. During prohibition the brewery made a near-beer called Tang, but apparently it did not do well, as when prohibition ended in 1933, the brewery did not come back like many of their forerunners did.