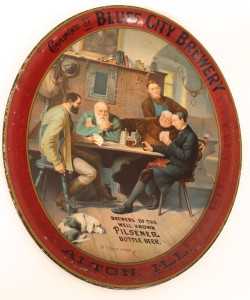 One of my favorite brewery trays was given out as a premium item to saloons and reads, “Compliments of the Bluff City Brewery” in Alton, Illinois, 1900.   This colorful tray shows a couple of friars or monks playing cards with two other men drinking beer and advertises their Pilsener Beer.   A dog lies sleeping on the floor and the cook looks over their shoulders watching “A Close Game” as the scene is labeled.

The Bluff City Brewery was located in Alton, Illinois within Madison County which is part of the St. Louis Metropolitan area. It was in business from 1881 through 1952.  William (Wilhelm) Netzhammer purchased the brewery in 1883. Netzhammer was the son of a brewer and he worked as a brew master and brewery foreman for several breweries before heading to Alton, Illinois with an opportunity to run his own brewery.