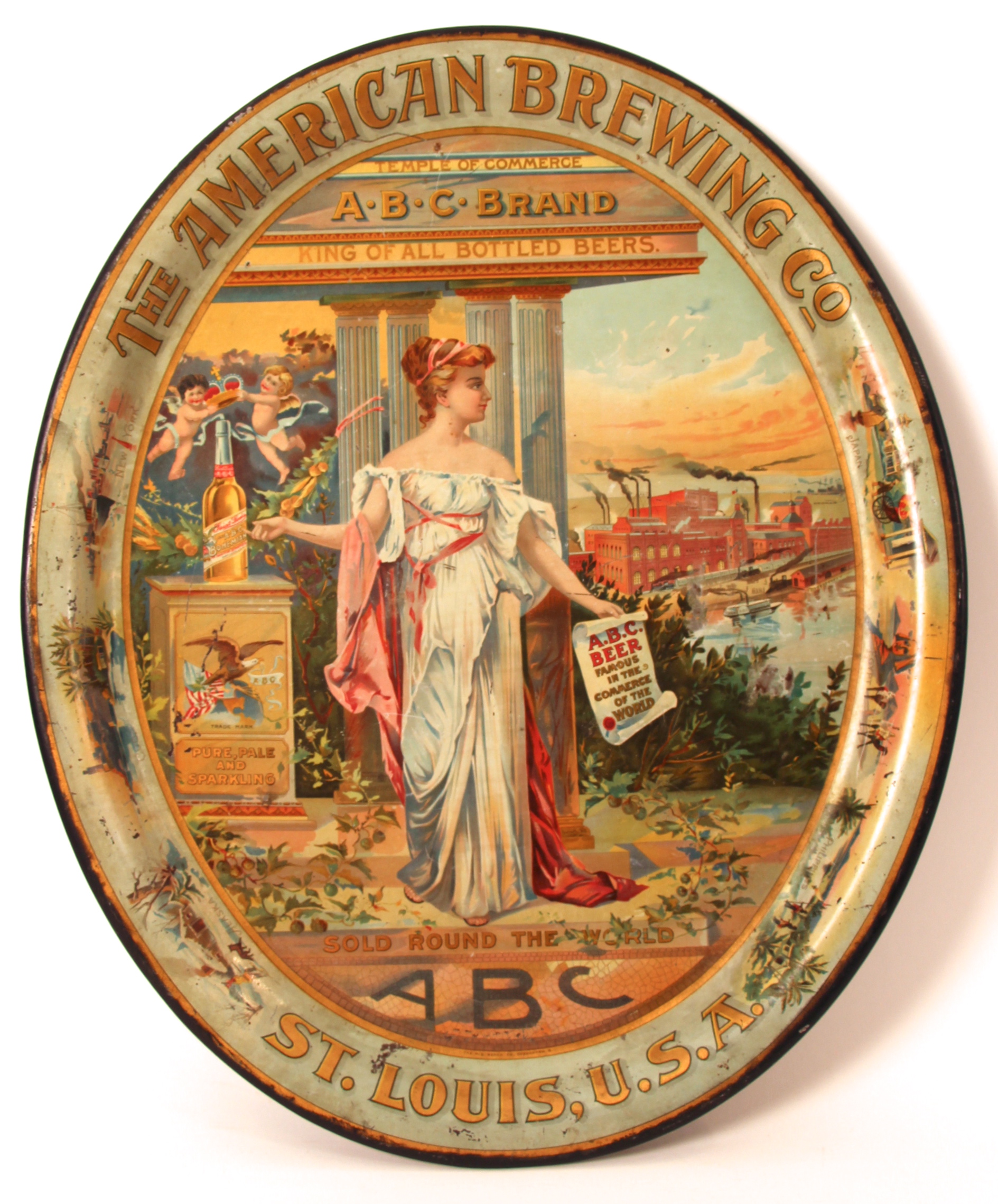 This is the “Temple of Commerce” beer serving tray manufactured by the American Brewing Company (A.B.C.) based in St. Louis, Missouri, circa 1905. The oval tin serving tray features a goddess posing with the St. Louis brewery in the background and holding a scroll that reads, “A.B.C. Beer Famous in the Commerce of the World.” The rim of the tray showcases colorful drawings of different areas A.B.C. sold its beer: Japan, Philippines, Egypt, Alaska, Cuba and New York City.

Worldwide distribution of beer was just beginning at this time and A.B.C. was one of the first innovative American brewers to ship long distances. The company exported beer in refrigerated box cars that allowed the beer to not spoil. One way to promote their worldly business was with colorful Illustrations of A.B.C.’s global locations included in their advertising.

The innovative brewery was also the original “King Of All Bottled Beers” describing its flagship A.B.C. beer brand. Their famous slogan was prominently displayed on the top of this serving tray. It tied in with the illustration on the left of the tray, showing two winged cherubs proudly crowning the top of an A.B.C bottled Bohemian beer. The beer bottle stands on a table showcasing A.B.C.’s trademark Eagle and American flag image with the phrase ”Pure, Pale and Sparkling”.

One magazine ad for A.B.C. Beer featured a long train of the brewery’s boxcars driving away from the enormous St. Louis plant. The ad read “The St. Louis A.B.C. Beers are famous the World Over. St. Louis A.B.C. Bohemian Bottled Beer shipped to Manila, Philippine Islands, Nov. 1898.” Another ad asked “Bohemians of the American World to stand by their favorite beer. It promotes health and good cheer.”

The American Brewery Company had much worldwide success during the years before Prohibition and a few years after. However, the “King of Bottled Beer” ultimately fell out of the competitive industry after the Repeal and closed its business in 1940. Today, many of the A.B.C. beer brand advertising relics are sought after by Breweriana collectors and are considered valuable.

However, the Koehler family quickly returned to the brewery business in 1890 and soon became an early successful industry giant selling all over the world. A.B. C. produced their own malt and specialized in bottling their beer. The company shipped to distant locations with its refrigerated box cars throughout the United States, Mexico, South America, Japan, Philippines, Egypt and Cuba. The company became known as “The King of Bottled Beer” and “Famous in the Commerce of the World.”

The American Brewery Company targeted advertising to different markets and in different languages. A 1902 Redbook magazine ad featured a woman holding a bottle of the A.B.C. Bohemian beer and stated “The A.B.C. Bohemian Bottled Beer, containing the very heart and marrow of the Bohemian Hops, its creamy body makes for rich, red blood and puts solid healthy flesh on the wasted frame.”

A.B.C. Beer even targeted its advertising on the back of a children’s “First Book of ABC’s”. A child reading the book would find “ Z is for Zeal to be shown in good things. Be it little maids, peasants or kings. A.B.C is the King of All Bottled Beers.”

When Prohibition hit the United States from 1920 to1933, it was a huge blow to large shipping breweries like A.B.C. So for a while, the company produced a brand cereal beverage and soft drinks. The A.B.C. Company ultimately fell under the umbrella of the Independent Breweries Company (IBC). However, once Prohibition ended, the bankrupt IBC saw a chance to sell some of its workable breweries to regain its investment. A.B.C. was one of them and was purchased by a Chicago syndicate.

The next several years were troublesome for the A.B.C. brand as it re-entered the competitive market following Repeal. It filed bankruptcy, had legal woes, reorganization and changing of hands a few more times. At one point, the St. Louis A.B.C. Brand was owned by the Al Capone led brewing syndicate out of Chicago, IL. It was said that Mr. Capone’s “boys” damaged the brewery one night when it was heavily vandalized.   The ABC Company eventually went out of business in 1940.