WHY DID SO MANY PRE-PRO ERA BREWERIES USE EAGLE LOGOS? 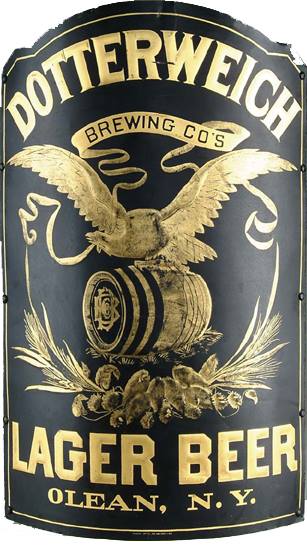 I have always been fascinated by the sheer number of pre-prohibition breweries which incorporated an eagle into their advertising pieces.   This particular sign from the Dotterweich Brewing Company uses both an eagle and a wooden beer barrel in their logo, which surprisingly was used by quite a few breweries of this era.  Why an eagle?  Did the eagle convey strength, vitality, or some other form of subliminal messaging to help push the brands sales? This gorgeous tin curved outdoor hanging corner sign from Olean, N.Y. is a great example of an eagle being incorporated into a brewers advertising strategy.

One reason perhaps so many brewers in the early 1900’s used an eagle might simply be true because the brewers of the era were trying to emulate the largest brewery in the U.S. at the time, Anheuser-Busch?   AB has used an eagle in the companies advertisements since the 1870’s, and surprisingly, even their competitors in their hometown market used eagles as well to emulate AB’s marketing prowess.   The American Brewing Company whose famous ABC brand of beer even stole the Anheuser-Busch tag calling themselves “The King of All Beers”.   Many readers will know that Budweiser has called itself the King of All Beers for well over 100 years also.   ABC also used an eagle in their advertising, similar to Anheuser-Busch.  In addition, the brewery across the street from AB’s factory at the time which was the Louis Obert Brewing Company included an eagle in their advertising logo.   The similarities don’t end there…as the Obert eagle just like the Anheuser Busch eagle had the eagle coming through the main letter of the brewery, that being an “O” for Obert, and an “A” for Anheuser.

The amount of breweries using an eagle in their ads was surprisingly very common.  However, after prohibition the use of an eagle dipped drastically, and for the most part, the only company which was using the eagle logo after prohibition was Anheuser-Busch, a symbol they still proudly use today.   I can only specutate the AB legal team put an end to any other competitors using eagles once prohibition ended, to ensure their long used trademark recognition.