In 1886 Mr. Jasper Meek announced the creation of the Tuscarora Advertising Company where his company initially started producing advertising on burlap feed bags, by sewing ads into the burlap bags directly. Suddenly with some demand, the company started producing flyswatters, buggy whips, yardsticks, muslin horse blankets, and dozens of other items.   At the same time the germans were able to produce a technology where images were put on stone plates, and subsequently transferred on to metal sheets.   Thus, the beginning of the modern tin sign began, and Mr. Meek brought the technology to Coshocton, Ohio.   By 1889 his company employed forty people working twelve hour days operating nineteen steam presses capable of producing fifteen thousand yardsticks each day!  By 1895 the company was starting to produce so many tin and offset metal signs advertisers from all over the United States were sending in orders, and the era of mass production for metal signs had begun.  At this time the company employed 175 people to keep up with the ever increasing demand.   For reasons unknown to me in 1901 The Tuscarora Advertising Company merged with it’s closest competitor to form the new Meek and Beach Advertising Company, also based in Coshocton, OH.  Thus the end for the company which started it all.  With Mr. Meek still in charge of the new operations, things continued to move forward in a positive way! 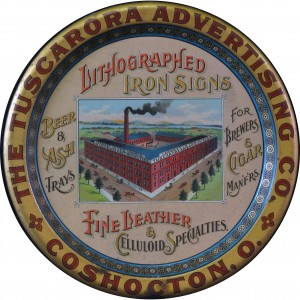