THE RIDENOUR-BAKER GROCER CO. CONVENTION COFFEE IS A HIT! 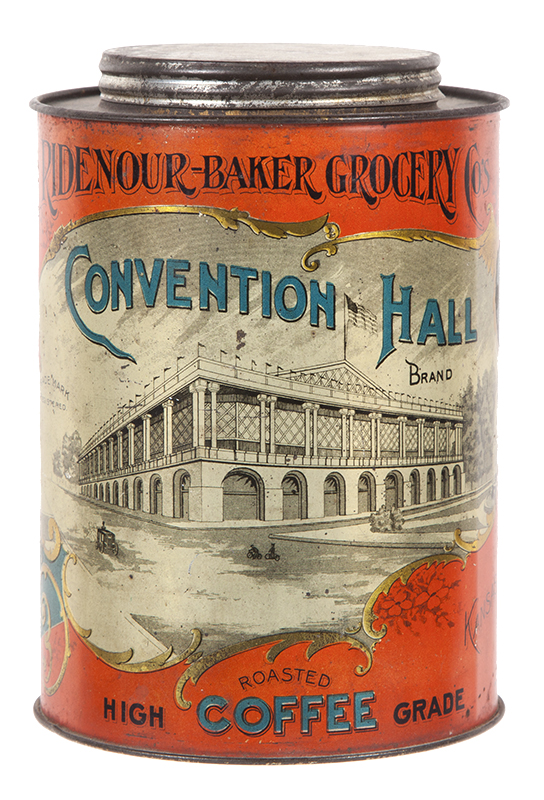 One of my favorite antique coffee tins from the glory days of advertising comes from the Ridenour-Baker Grocery Company which was based in Kansas City, Missouri.   The company capitalized on the 1900 Democratic Party Presidential Nominating Convention which occurred in 1900 by introducing the Convention Hall brand of roasted coffee.

The company featured at least three different colored coffee cans which all brilliantly displayed an image of the Convention Hall building in the foreground.   The brand had to be popular considering they developed different colors for the tins, so this was not designed to be a short shelf life brand.   This tin is certainly a crossover type of collectible, garnering interests from both the coffee tin collectors and the political memorabilia fans.

The Convention Hall in K.C. was originally located at the intersection of 13th Street and Central.   Interestingly, the original building which was intended for the Presidential nomination burned to the ground just three months before the actual convention start, and amazingly, the new building was ready to go when the convention started on the very same spot!  Nominated at the convention were the team of William Jennings Bryan and Adlai Stevenson, who eventually lost to the Republican, James McKinley for the Presidency.

The Ridenour-Baker Grocer Company originated in Lawrence, KS in 1858, however, the company relocated in 1878 to an address at 933 Mulberry Street.   The company remained in operations in K.C. until 1933.