I’ve always been fascinated with the mascot characters used in many vintage children’s shoe advertisements such as the Poll Parrot brand. In 1925, the parrot icon was the brainchild of Paul Parrot, the original owner of the Paul Parrot Shoes based in St. Louis, Missouri. Mr. Parrot had an obvious reason to use the parrot for his shoe logo that tied into his name and was a version of Polly Parrot. The company used several parrot models over the years and created the slogan “They speak for themselves”. Their children’s shoes marketing campaigns included many giveaways such as rings, buttons, whistles, bookmarks and banks with the parrot illustration.

Poll Parrot Shoes Slogan “They Speak for Themselves”

In the 1930’s, a syndicated radio program was launched called the “Cruise of the Poll Parrot”. The radio series featured adventures of a whaling ship also named for the witty Poll Parrot mascot. In 1947, The Company also sponsored the popular Howdy Doody children’s show. The International Shoe Company bought out the Paul Parrot Company early on and used the Paul Parrot trademark for it’s ongoing success. 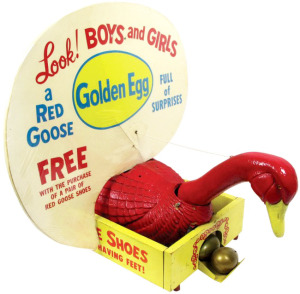 The Red Goose Shoe was another popular brand represented by its colorful red goose mascot. The company was originally Giesecke-D’Oench-Hayes after its founders in 1896. Many claimed that “Gieseke” was German slang for “goose”. However, the goose logo was actually created as a pun on the Gieseke name pronounced (Geese key). The red color came about during the St. Louis World’s Fair in 1904 when the goose was painted red on shipping cartons for identification.

The Red Goose Shoes brand was trademarked in 1906 and marketed to children. With each purchase of Red Goose shoes, the child would get a prize by pulling down on the long neck of a goose store display. The goose would release a golden egg with a surprise candy or toy such as a whistle or spinning top. Eventually, the Brown Shoe Company bought Red Goose and incorporated it into its line of shoes. The company avidly displayed their Red Goose logo on neon and lighted signs. The beloved Red Goose mascot was discontinued in the 1970’s.

Buster Brown and Dog Tige based on the Cartoon Strip 1904

Another fun loving mascot was Buster Brown and his dog Tige, introduced by the Brown Shoe Company at the 1904 St. Louis World’s Fair. Richard Outcault was the artist who invented the Buster Brown cartoon strip in 1902. 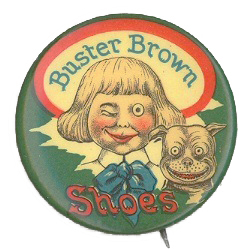 Buster Brown and his dog Tige were so popular they were featured in a nationwide radio series in 1943 and then moved to a television program in 1950. Brown Shoe also offered in-store Buster Brown comics, on which a retailer could rubberstamp their address.

The Company created many promotional items such as rings, buttons, clocks, figurines, postcards and lithographs. Incredibly, the Buster Brown brand is still available today, over one hundred years later. 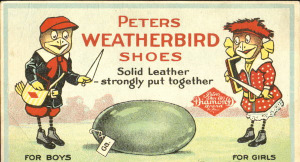 One other fun character was the Weatherbird representing Weatherbird Shoes manufactured by the Peters Shoe Company based in St. Louis. The company used this initial image of the Weatherbird in shoe promotions from 1901 to 1932. This was the same cartoon mascot created by artist Harry Martin for the weather section of the St. Louis Post-Dispatch newspaper. Even when the company merged in 1911 with the Roberts, Johnson and Rand Shoe Company, the Weatherbird brand remained an integral part of their product line. They produced many promotional items like whistles, visors, tin clickers and postcards. The Weatherbird Shoe brand was eventually discontinued. However, the Weatherbird is still an iconic figure with the Post-Dispatch today, and they’ve utilized six different artists over the years to keep the legendary bird thriving.

For years, these four shoe mascots: Poll Parrot, Red Goose, Buster Brown and Weatherbird competed to win over kids and their parents for shoe purchases. Today, many collectors seek these rare vintage shoe advertisements that feature the colorful characters. The antique memorabilia with these mascots are amongst the most prized and always create entertaining conversation pieces.