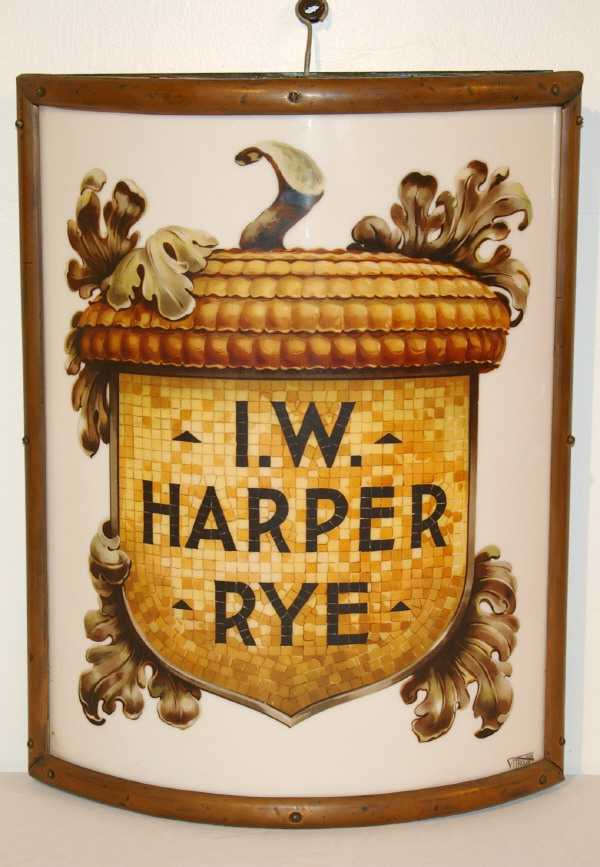 Featured is a beautiful vitrolite corner advertising sign from the I.W. Harper Rye Whiskey brand. These vitrolite corner signs designed to hang on the edge of a 90 degree angle corner of a tavern or saloon are especially coveted, and because of the solid glass design and wooden frame, they have lasted for 100+ years in nice condition oftentimes. The corner sign has a brass metal like encasing which holds the glass in place firmly with brass screws conveniently placed around the frame.

The I. W. Harper Brand was the brainchild of Isaac Wolfe Bernheim, who started his business Bernheim Brothers in Louisville in 1872. After a good run, he eventually hit gold when he introduced the I.W. Harper brand, ironically using his initials I.W. which were his first two initials of his first and middle names, Isaac Wolfe., i.e. I.W. Originally based in Paducah, KY, Isaac moved his business to Louisville in 1888 to be closer to a bigger city, and better waterways to move his barrels of whiskey. The I.W. Harper brand was introduced in 1897 and immediately gained a reputation and a huge following due to it’s smooth flavor and good quality. Considering one can still find this label readily in any liquor store in the United States, I would say his memory has done pretty well for itself from Isaac’s dream which started 148 years ago.