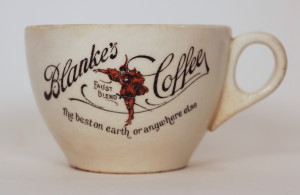 Some of my favorite antique advertising collectibles are from the C.F. Blanke’s Faust Blend Coffee brand. One of the reasons I like this brand is its trademark devil character and the reference to a famous 1800’s German play called “Faust”. In the plot, the devil tempts the main character Faust with unlimited knowledge and worldly pleasure. In the Blanke’s Faust Blend Coffee advertising, the devil character represents tempting consumers with their savory, superior rich brand of coffee. I also like the colorful designs in C.F. Blanke’s coffee advertising memorabilia. You can easily find examples of the bright images on coffee tins, stoneware pots, coffee mugs and signs. The Faust Blend Coffee earned the highest award Grand Prize and Gold Metal at the St. Louis World’s Fair in 1904. The Faust brand advertised their coffee as “The best on earth or anywhere else”. 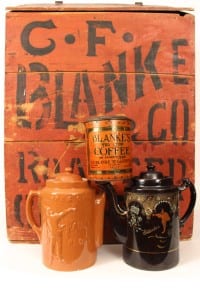 The C. F. Blanke Tea & Coffee Company was founded by Cyrus F. Blanke and operated in St. Louis from 1889 to before World War II. Mr. Blanke started selling coffee, tea and spices at the age of 20. He established the C.F. Blanke Coffee Co. at 8 South 2nd Street in St. Louis, MO.

As Mr. Blanke’s coffee business grew, his entrepreneurial ideas also expanded. He invented the Blanke Patent Sanitary Coffee Pot, acknowledged as the “perfect pot” by the National Coffee Roasters Association. Blanke also invented the first ever “instant” coffee, Faust Instant Coffee. He also started the St. Louis Tin and Sheet Metal Company that produced his own coffee cans. C.F. Blanke Company started their own glass making company which produced the glass containers for their coffee as well as local dairy bottles for milk.   Blanke published the “Spicy Monthly” and other trade publications.

Cyrus Blanke was very good at creating a brand identity for his coffee. One well-known promotional strategy was when he bought a horse that Theodore Roosevelt rode at the dedication of the 1904 St. Louis World’s Fair.   He strapped a 50 lb. can of coffee to a boy who rode the horse and this image became a new logo. Also, as a philanthropist, Cyrus Blanke restored President Ulysses S. Grant’s Cabin for thousands to see at the World’s Fair.  In 1907, August A. Busch bought President Grant’s Cabin and eventually moved it to Grant’s Farm where it still is today.

The C. F. Blanke building still stands at 904 S. 14th Street and has been in use as commercial office space in more recent years.  Originally built by the Haydock Brothers Carriage Company, Mr. Blanke bought this building from the Haydock’s around 1910 and it became the main factory building for their empire, which later expanded to markets all around the Midwest and the Southern United States.