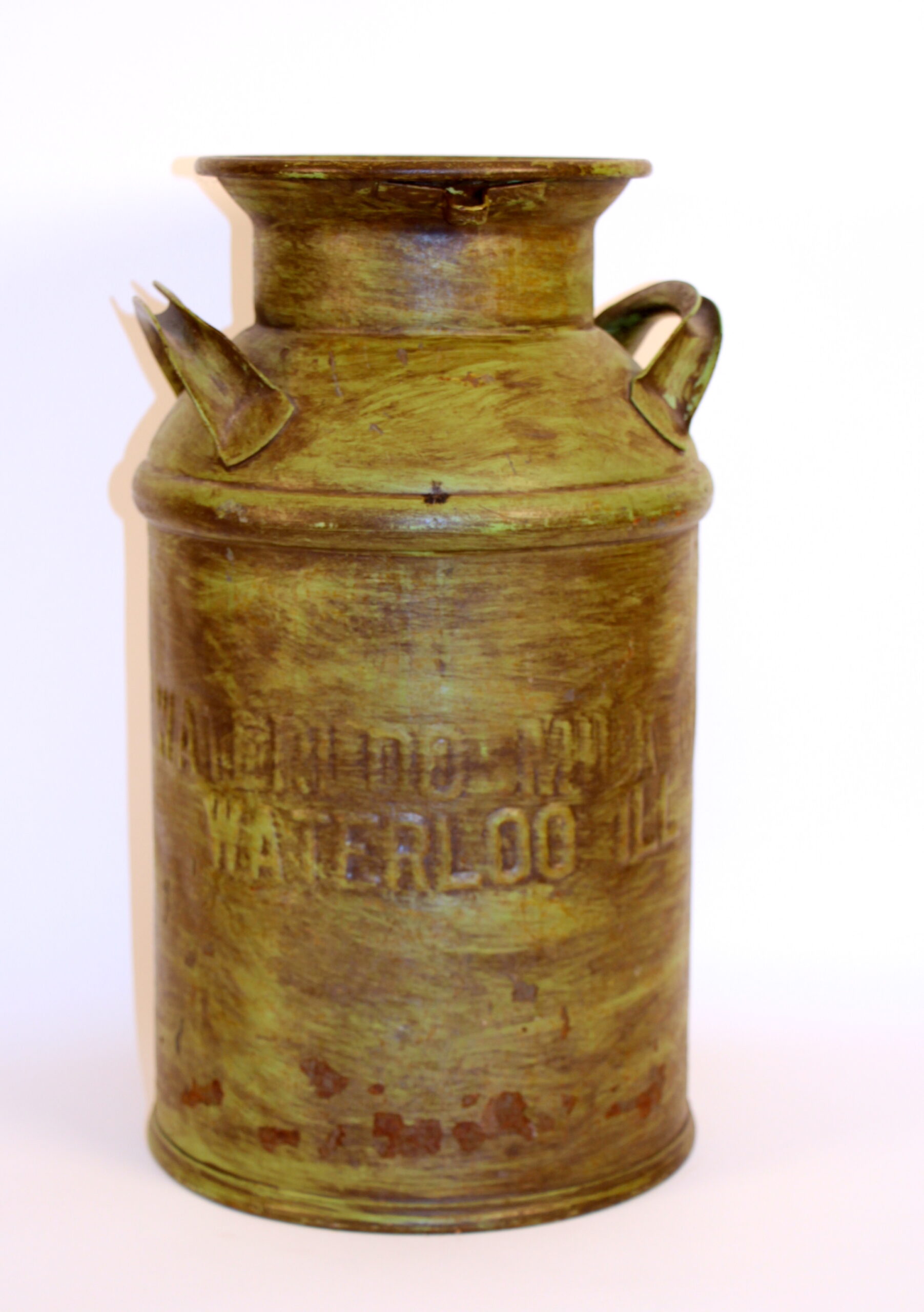 This is a green metal milk can from the Waterloo Milk Company, based in Waterloo, Illinois, circa 1930’s. This antique milk can measures 19 inches high by 11 inches wide and is embossed with the dairy’s name and city on the front. This sturdy can has two handles and the joints were welded together for durability. The milk can was used to store, cool and transport milk. It was easier to use and held more milk than the original milk pails.

Milk and cream cans are sought after antique dairy collectibles. Milk cans came in 5, 8 and 10-gallon sizes. Milk cans had either plug covers or umbrella covers. Plug covers had a handle in the middle and umbrella covers were smooth on top. Extra heavy milk cans were available to stand up to the tough wear and tear of longer transportation.  Cream cans were smaller than milk cans since the cream was a more concentrated product and came in 4, 8, 10 and 12-quart sizes. A chain usually held onto the lids of cream cans. Some cream can lids were designed to force the air out of the can to keep the cream from churning into butter during transportation. Milk and cream cans did not provide enough insulation and on warm days the milk and cream in cans became warm and would sour. Milk and cream cans were later replaced in the 1940’s and 50’s with farm bulk tanks and tanker trucks.

The Waterloo Milk Company was a dairy in Waterloo, Illinois in Monroe County from 1897 to 1969. The dairy manufactured whole white milk, chocolate milk, whipping cream, orange juice, grape juice, ice cream, sherbet, cottage cheese and butter. The company started in 1897 and was originally known as the Fountain Farmer’s Creamery Company. The company changed their name in 1908 to the M & O Milk Company because the dairy was only located a few yards from the Mobile & Ohio Railroad tracks. However, when the company started condensing milk in 1918 the name changed to the Waterloo Condensed Milk Company. Finally, in 1925 the business changed their name to The Waterloo Milk Company, Inc. after it incorporated. The company continued with this name until the business closed in 1969.