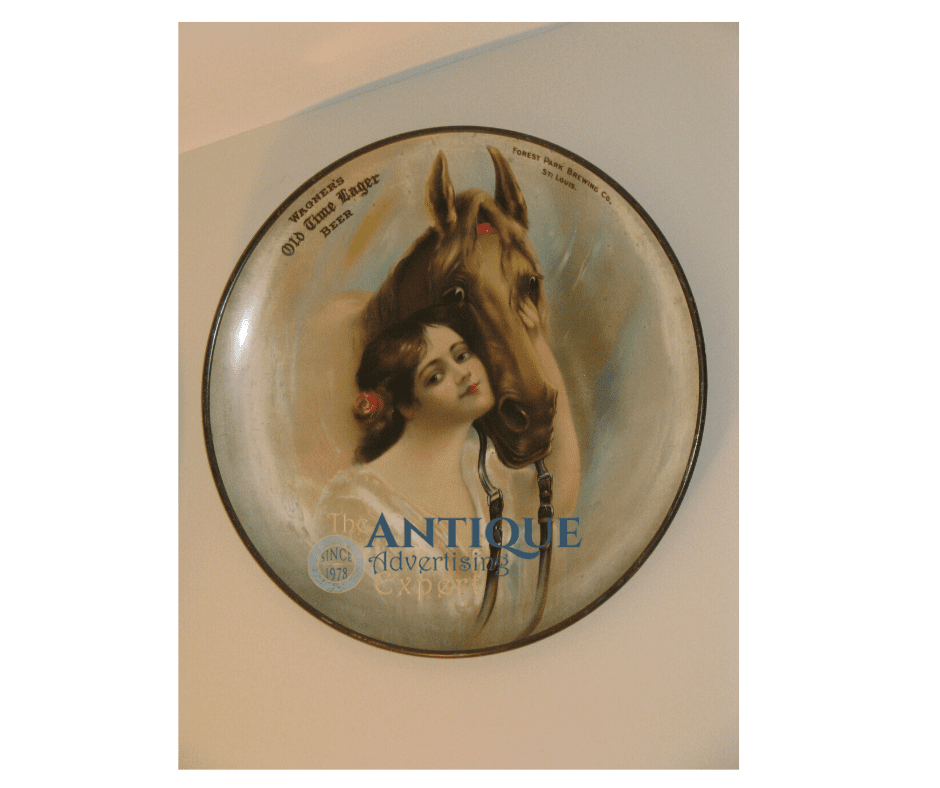 This is a Forest Park Brewery Charger Tray made to promote Wagner’s Old Time Lager Beer, 1910. This beautiful 16” round charger features a young girl with her face and arms embracing her horse. It is labeled “Friends” on the bottom rim and reads on the top “Wagner’s Old Time Lager Beer, Forest Park Brewing Co. St. Louis.”  This is an especially hard to find vintage collectible because The Forest Park Brewery released very few advertising items in their short seven years of business from 1910-1917. The Meek Company made the tray in Coshocton, Ohio, considered “the birthplace of advertising art”. The tray shows intense colors of blue, brown, cream, gold and red. The horse scene is unique to the St. Louis’ marketplace even though it’s considered a stock tray used for other products.

The Forest Park Brewery was established in 1910 at 3662 Forest Park Blvd. in St. Louis, MO. Owned by Ed Wagner, Sr., he decided to build this brewery across the river from his other brewery, Wagner Brewery in Granite City, IL after it was bought out in 1907 by the Independent Brewing Association. The Forest Park Brewery was known for it’s unique “coffee pot” shape. It produced two malt style beers brands; Forest Park and Old Time Lager. Both beers were advertised to be “as good as the German imports”.   Tying the taste into a German imported beer made sense since St. Louis had a large population of German heritage in the early 1900’s.  Unfortunately, with prohibition impending and sales declining, the Forest Park Brewery went bankrupt in 1917 and it closed. However, Papa Joe Griesedieck of the Griesedieck Brothers Brewery family bought the building and produced “Hek”, a prohibition era beverage during the 1920’s. When prohibition ended in 1933, the Griesedieck family started the Falstaff Brewery in the same building. Today, parts of the original building still stand but not as a brewery.